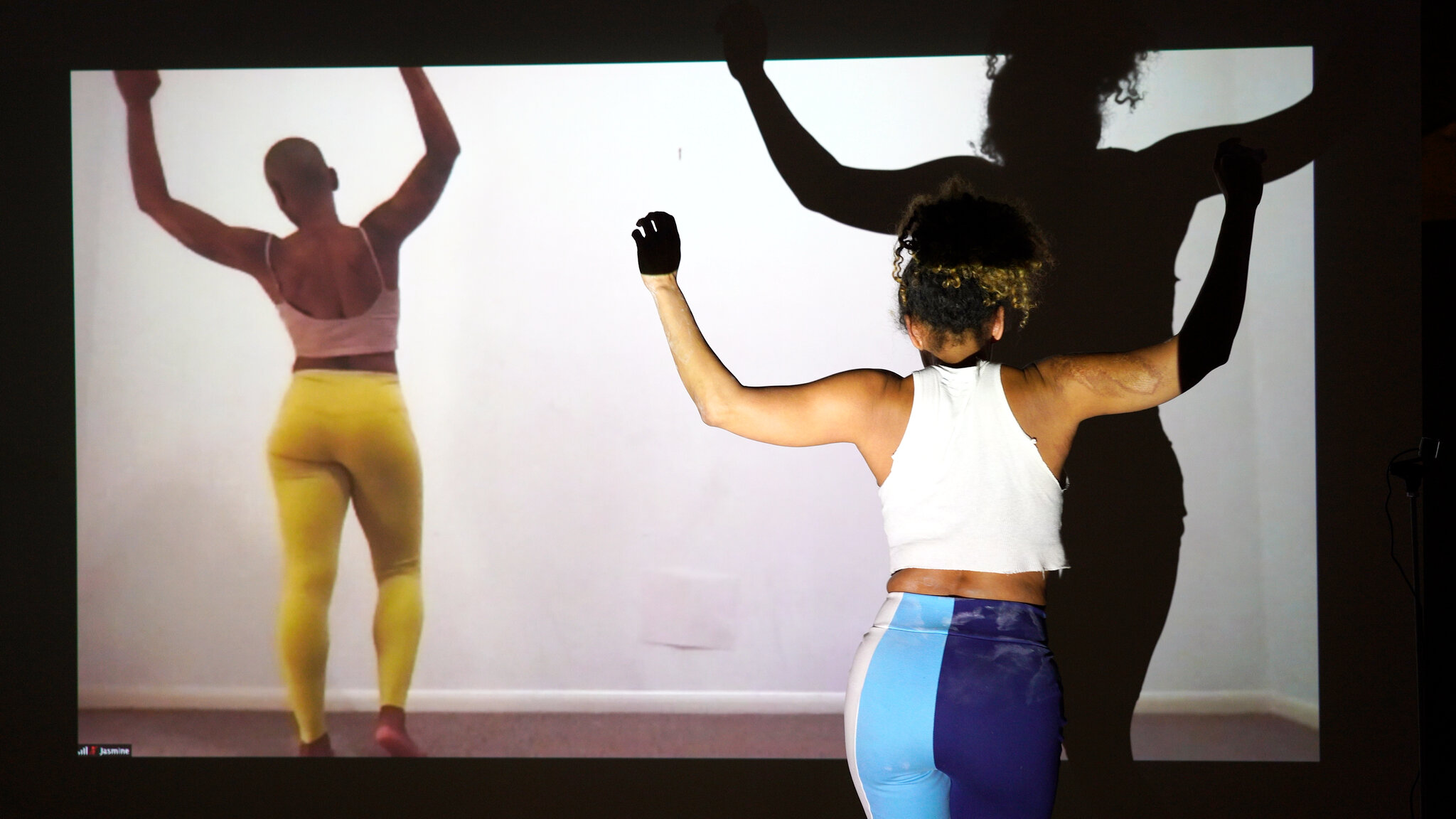 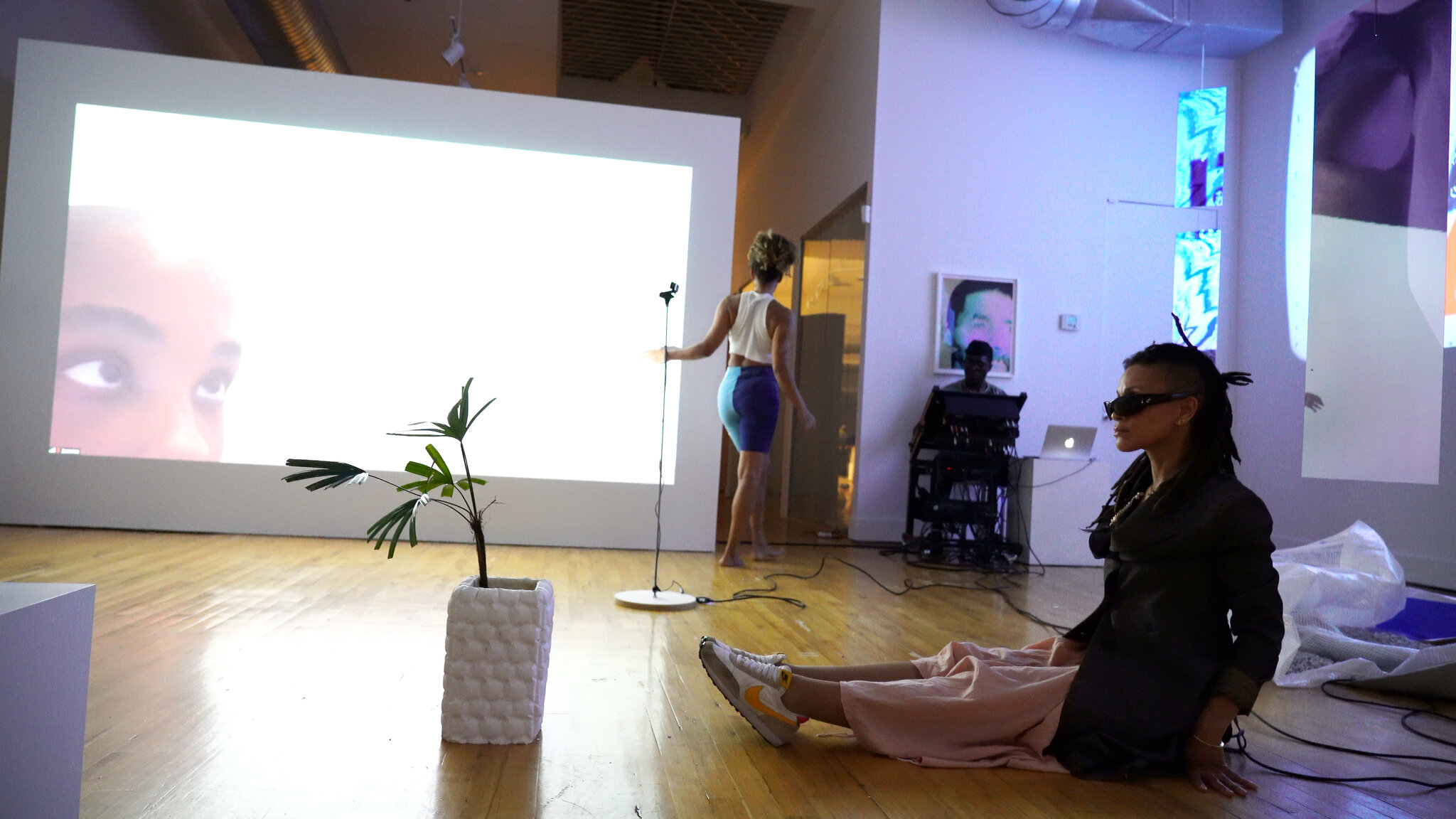 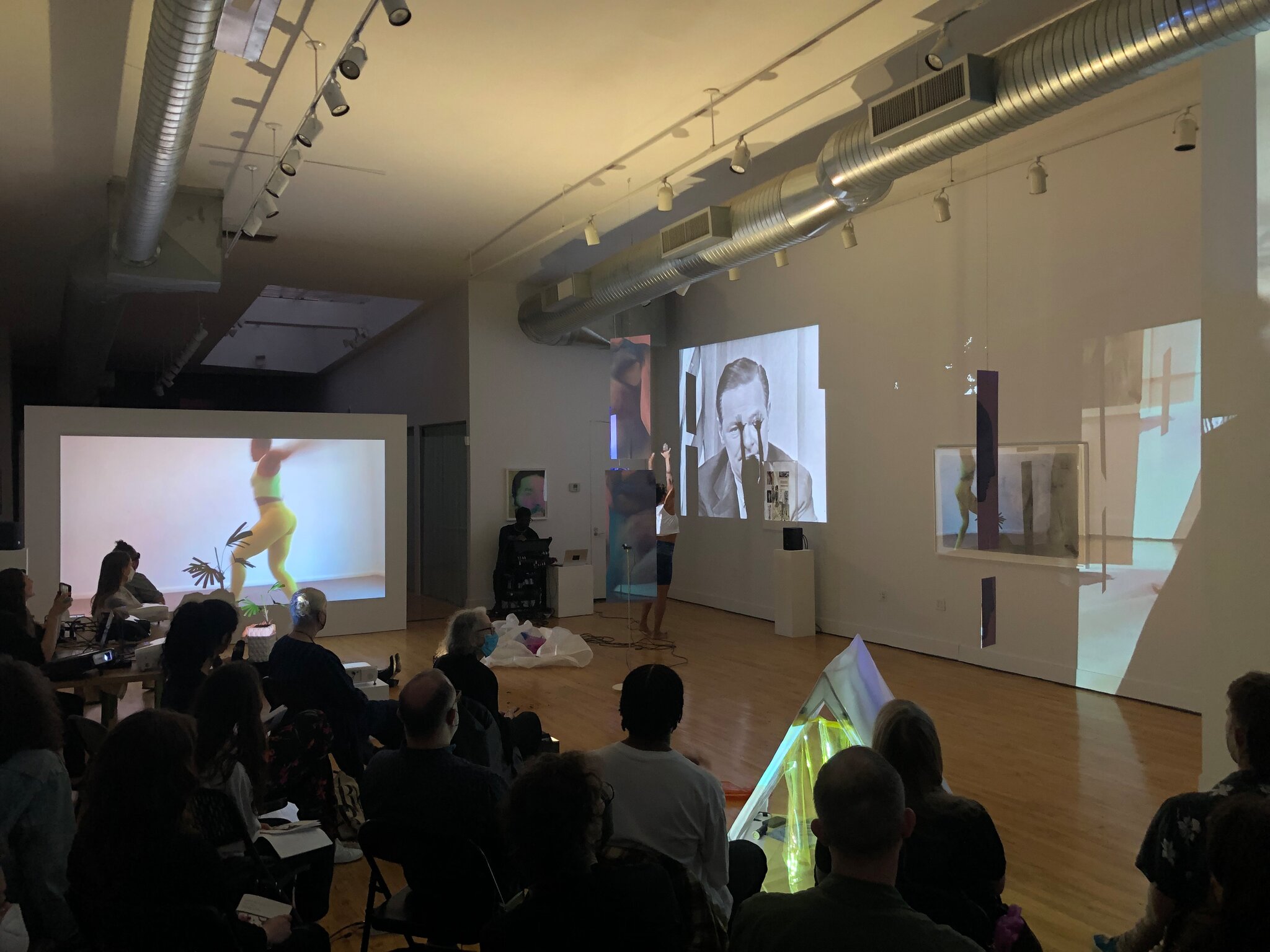 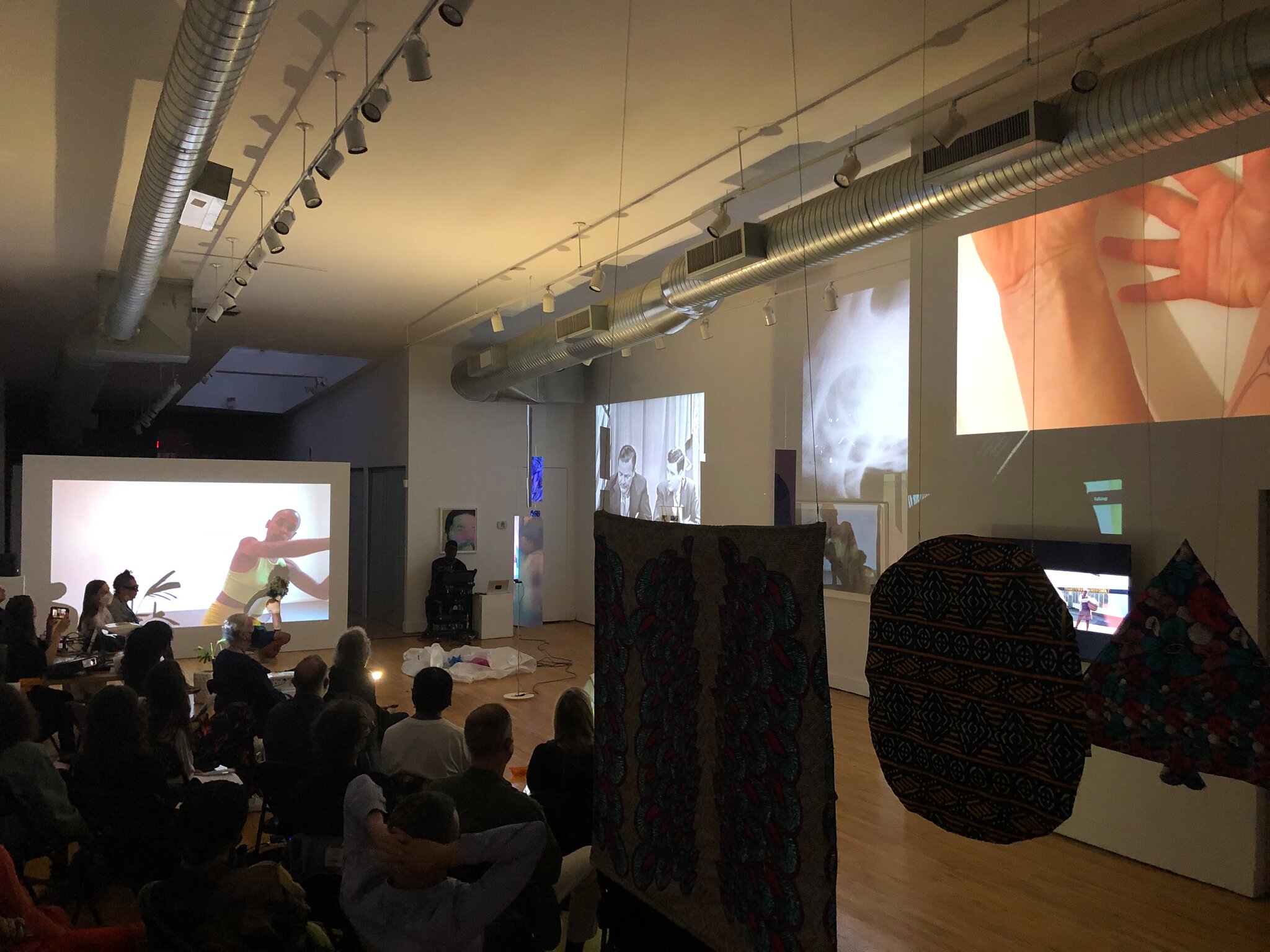 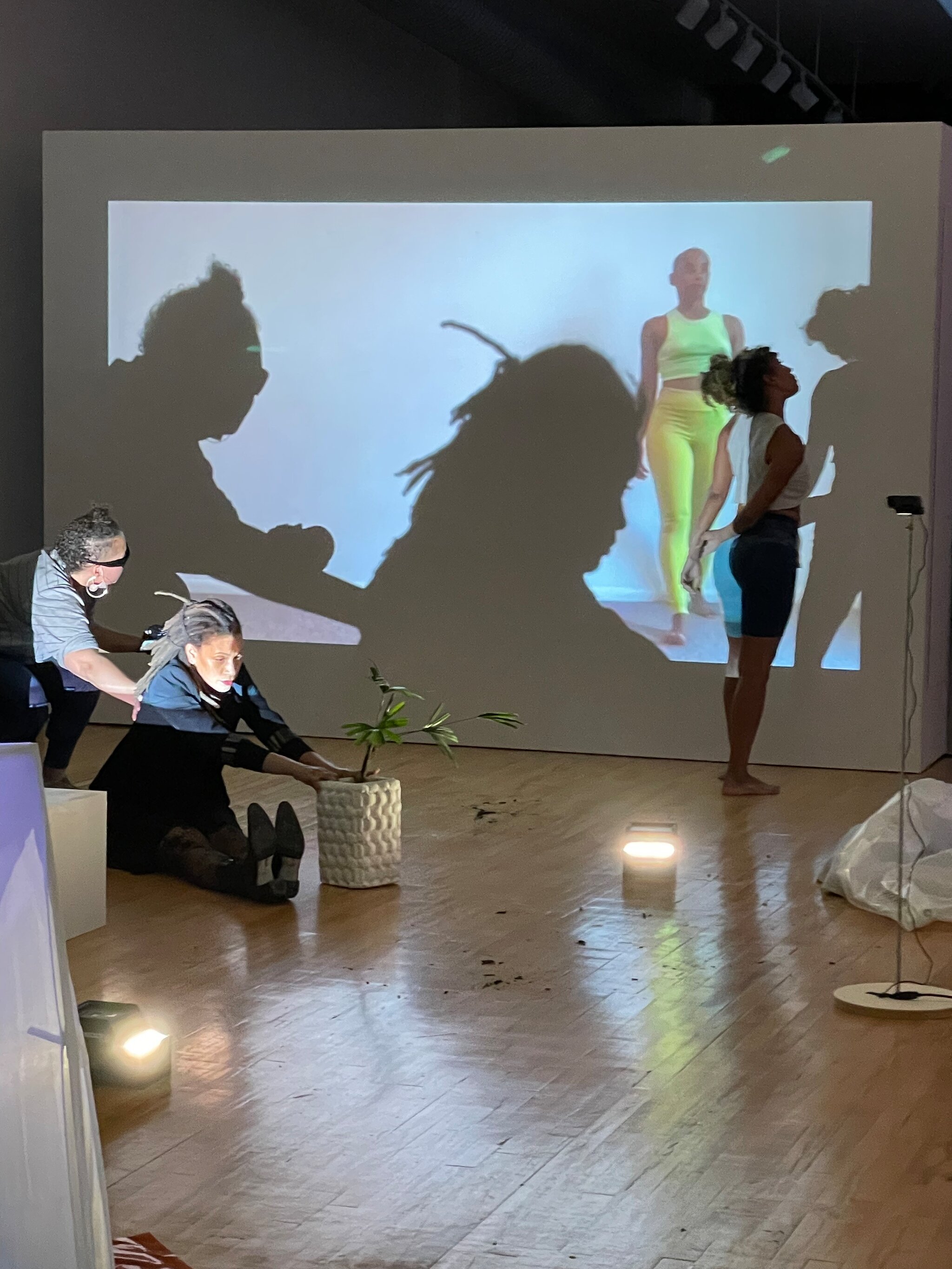 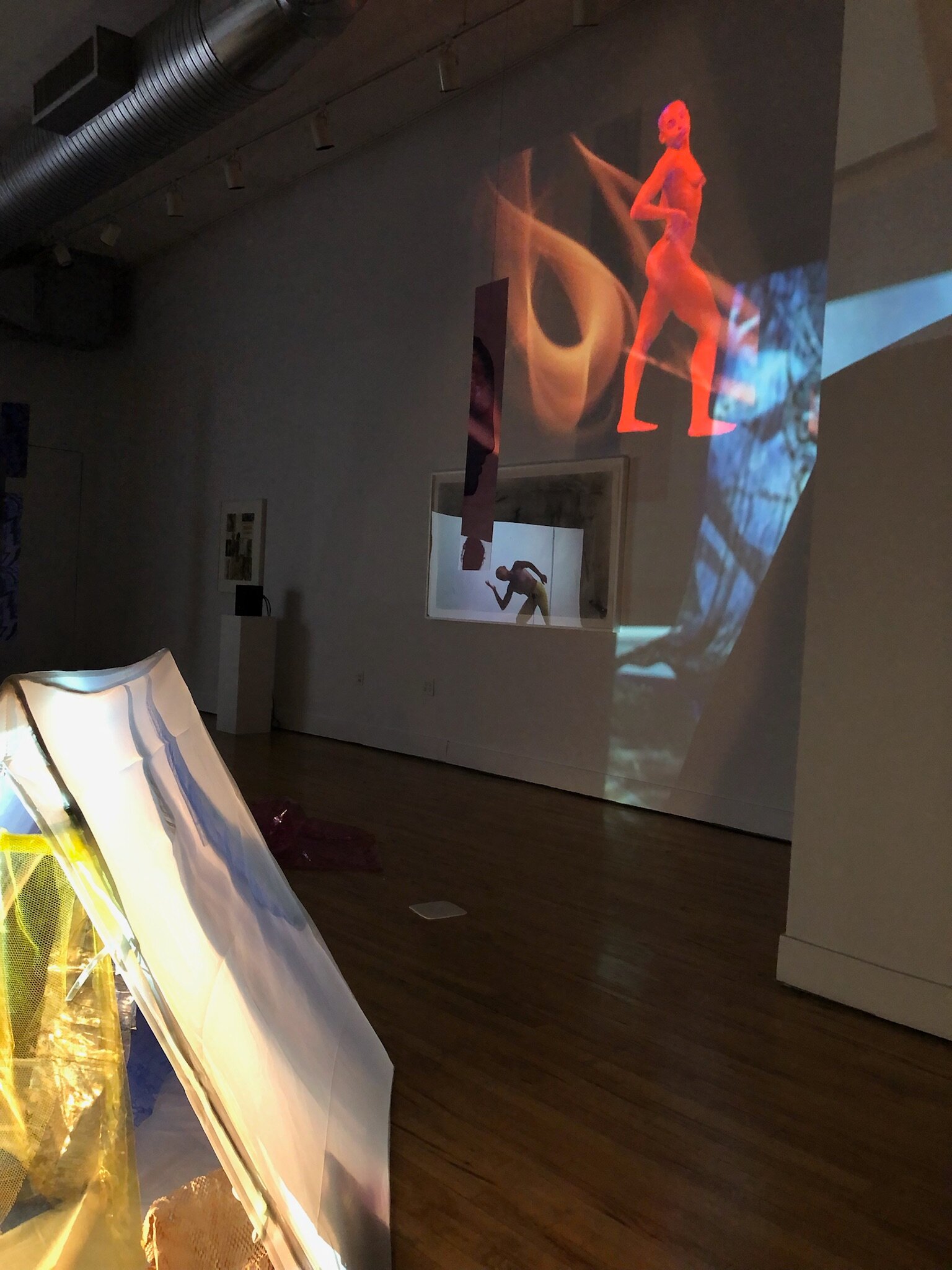 Future Variations (V) (2022) is an ongoing work in progress. Each artist’s contribution is an expression of their individual practice as well as an experiment in collaboration. All involved are responsive to past performances and iterations as experienced through screen and page, yet each new movement as it is enacted, captured and later transmitted is a series of temporal, spatial, aural and visual shifts that encourage potential and future variations.

Variations V (1965), combined film, dance, animation and sound into a sensorial and durational experience. Led by John Cage and Merce Cunningham with moving images by Nam June Paik and Stan VanDerBeek, the project brought together over fifteen practitioners from experimental dance, sound and moving image for a simultaneous live and mediated performance. Variations V was performed nearly fifty times across the US and Europe from 1965-1968. The progressive nature of this historical work and what it proposed encourages the furthering of its experimentation, interfaces and outcomes.

For Future Variations (V) Alisha B Wormsley was asked by Sara VanDerBeek to work with scans of two 16mm film reels originally created by Stan VanDerBeek as part of his “Movie Mural” for Variations V. Working with images from her Children of NAN archive, she intervened in the black pauses between frames and superimposed contemporary and historical imagery upon VanDerBeek’s original filmic collages to
create multi-dimensional moving imagery that functions as the two main projections for Future Variations (V). Wormsley is also active in the performance, capturing and projecting actions.

Kamau Amu Patton uses a webcam and soundboard to expand upon the intended function of antennaes in Variations V. Sound and imagery is produced by Patton via a software patch designed to process movement and output as sound in real time, in this instance the improvisational choreography of Miriam Parker and task-based movements of Jami-lah Raegan. Patton has also added microphones to Parker’s props to generate additional tones.

Sara VanDerBeek re-imagines the original filmic scenography presented by Stan VanDerBeek and then later refined by Beverly Emmons for the tour and broadcast of Variations V. She also contributes to the multiple projections with a research reel employing images from the past two years of research and development of the project intermixed in an associative fashion emulating her father’s original filmic approach to include rehearsal footage, and source imagery from various original stagings of Variations V.
Jasmine Hearn’s movements are visible as a large projection being streamed in remotely via Zoom. Hearn is responding to the image and sound trans-mitted to them and sending back their solitary performance for inclusion in the larger space.

Miriam Parker begins the performance inside a tent-based installation she frequently uses for her interdisciplinary performances. The tent functions as a projection surface for a camera live-streaming her movements amongst a collage of colored gels. Parker moves outside of the tent with additional materials including a thin tarp and gravel. Contact mics are attached to Park-er’s tarp and other vinyl materials. Parker moves through the space in a series of improvisational movements both generating and responding to the sounds and images.

Realized as repertoire between past and present practitioners, this project has been devised with contemporary scholars, artists and educators. In addition to the performers’ contributions we have benefitted from conversations with Andrew Lampert, Gloria Sutton, Patricia Lent and Ken Tabachnik from the Merce Cunningham Trust, Laura Kuhn from the John Cage Trust, Julie Martin from E.A.T Archive, Chelsea Spengemann from the Stan VanDerBeek Archive, Beverly Emmons - Lighting Designer and Phil Edelstein and John Driscoll of Composers Inside Electronics, who have realized David Tudor’s work for contemporary audiences.