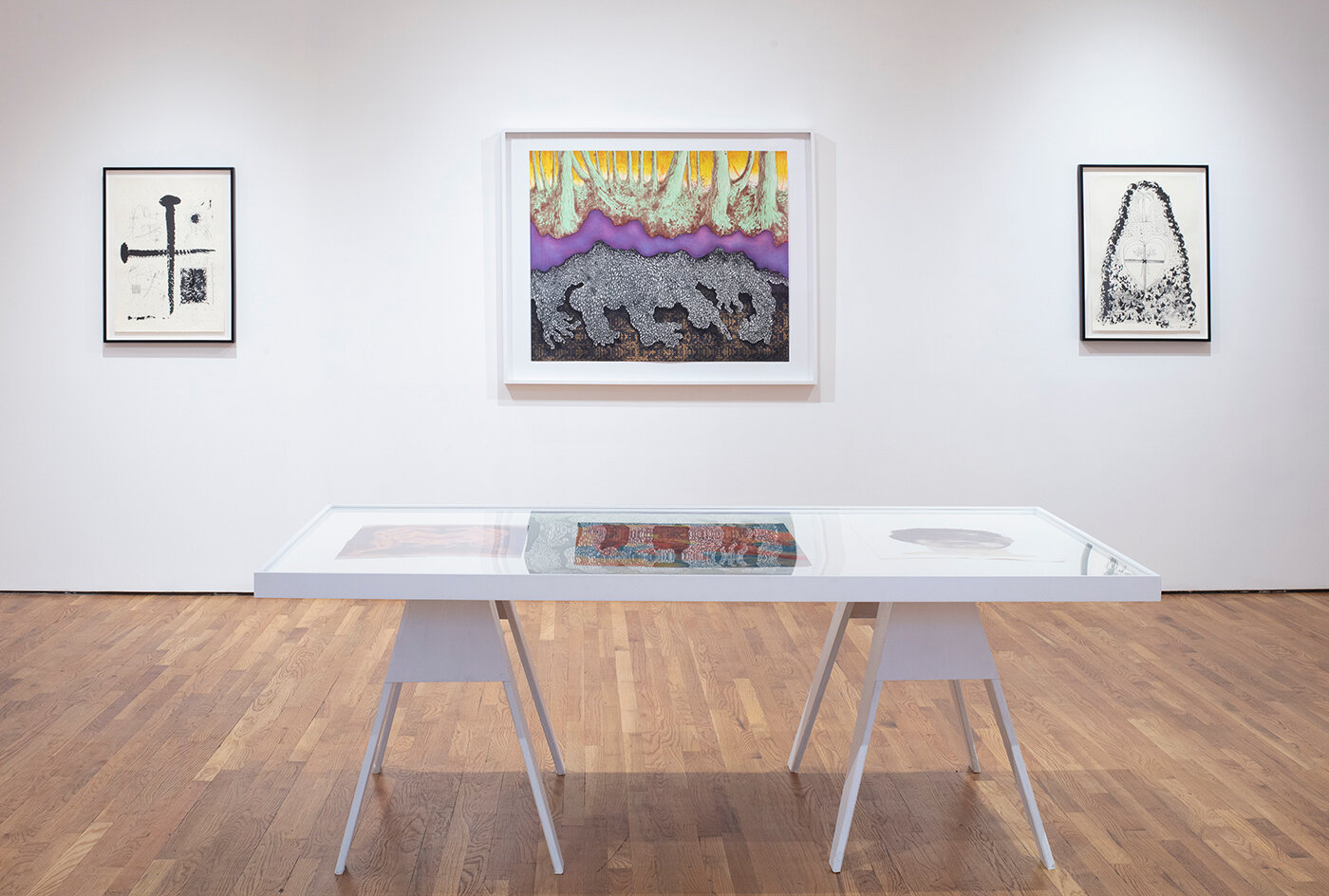 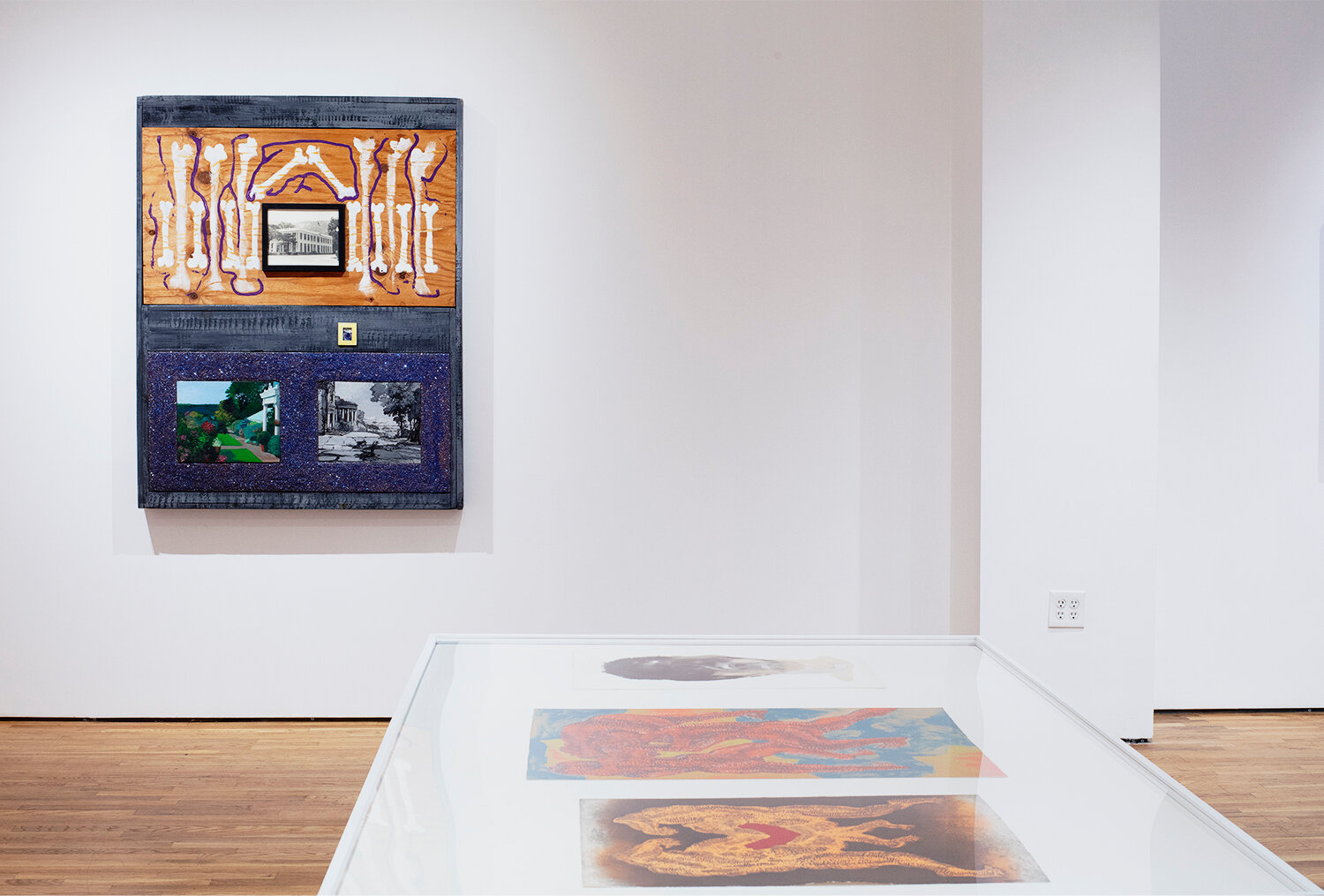 “For the artist in our time to enter the stream of contemporary ideas, he or she has to abandon the notion of a fixed center. He is his own center, being if he chooses in several places at once, speaking several tongues or being able to look at any given situation from a variety of points of view. The concept of multiple narratives, a story with two or more points of view, is the operational principle of my work.”

“This idea that we don’t exist as singular bodies or singular identities, I think, has always been very much part of my work…the overwhelming amount of eyes serves that.”

Soft Network’s Fall exhibition features mixed media paintings and works on paper from the Estate of Paul Gardère paired with prints by Didier William. This project is an expansion on the recent solo presentation of work by Paul Gardère at Independent 20th Century. This is Soft Network’s inaugural presentation at our new shared space with Rachel Comey.

Gardère, born in 1944, and William, born in 1983, both immigrated from Port-au-Prince, Haiti to the United States in their youth, bringing with them the complex legacies of Haitian visual culture, myth and Kreyòl language. Their shared experiences navigating multiple identities as part of the Afro-Caribbean diaspora are reflected in the ways they each depict the dualities and contradictions of —as Gardère states— "abandoning the notion of a fixed center” and “being in several places at once.” Both artists adapt veve symbols and use wood, vibrant colors and rich textures to present landscapes and bodies as territories that are, at once, contested and coalescing.

As light shimmers out from fields of red, green and purple glitter in Gardère’s work, likewise William’s strong figures cloaked in eyes and glistening marks evoke the spirits —Iwa— and reward close examination. The liminal spaces gracefully and attentively assembled in each artist’s compositions also invite viewers to contemplate, connect and weave relationships out of dissonance and disassemble dominance.

A new multicolor intaglio print made by William with renowned downtown Manhattan workshop and publisher Harlan & Weaver titled Cursed Grounds, Blessed Bones is on view for the first time, accompanied by a previously unexhibited, untitled gouache portrait made by Gardère in 1991 following his residency at The Studio Museum in Harlem.

In keeping with Soft Network’s aim to create dialogue between contemporary artists and artist estates, this project brings Gardère’s re-emerging legacy into conversation with William’s thriving interdisciplinary practice. What is revealed is a visually striking, intergenerational exchange about topics and concerns of remarkable pertinence.

With thanks to Cat Gardère, Didier William and James Fuentes.

Paul Claude Gardère (1944 - 2011) was a Haitian and American mixed-media artist who received artistic training at The Art Student’s League of New York (’60 - 61), Cooper Union (BFA ‘67) and Hunter College (MFA ‘72). He holds the distinction of being the first Haitian Artist-in-Residence at The Studio Museum in Harlem (‘89-90), was awarded a residency at Fondation Claude Monet (’93) and received the Joan Mitchell Foundation Award for Painting in 1999, among other notable achievements. During his 40+ year career, he worked and exhibited in both the United States and Haiti, but maintained his primary residence in Brooklyn, NY.
​
Exhibiting vast technical and stylistic range, Gardère’s painting and mixed-media discipline realized diverse works and series, all of which investigate the phenomenology of racial and cultural relations (both conflict and syncretism) produced by Western imperialism and transnational migration in his native and adoptive countries. Drawing on history and symbology from Haitian, French, and US American cultures, Gardère’s work unites the national histories that informed his cultural experience and conveys the complex, often paradoxical multiplicities implicit in Afro-Caribbean diaspora identity and the post-colonial immigrant experience. His works simultaneously reflect his own inner tensions as well as the dynamics of power and cultural identity at play in global populations reckoning with histories of exploitation and forced acculturation to Eurocentric systems and values.

During his lifetime, Paul Gardère received respected curatorial acclaim, particularly among academics and curators of Latin American and African art who grasped the thematic and symbolic references running through his work. Works of his reside in numerous institutional and university permanent collections. Despite institutional and curatorial acclaim, his career largely escaped recognition in the for-profit gallery economy of the late 20th and pre-digital 21st centuries. His sudden death in 2011 at age 66 left behind a formidable estate of un-exhibited works. He remains an under-recognized American artist of Caribbean descent in the canons of Western contemporary art.

Didier William is originally from Port-au-Prince, Haiti. He earned an BFA in painting from The Maryland Institute College of Art and an MFA in Painting and Printmaking from Yale University School of Art. His work has been exhibited at the Bronx Museum of Art, The Museum of Latin American Art in Long Beach, The Museum at the Pennsylvania Academy of Fine Arts, The Carnegie Museum, Crystal Bridges Museum of American Art and The Figge Museum Art Museum. He is represented by James Fuentes Gallery in New York and M+B Gallery in Los Angeles. William was an artist-in-residence at the Marie Walsh Sharpe Art Foundation in Brooklyn, NY, a 2018 recipient of the Rosenthal Family Foundation Award from the American Academy of Arts and Letters, a 2020 recipient of the Joan Mitchell Foundation Painters & Sculptors Grants and a 2021 recipient of a Pew Fellowship from the Pew Center for Arts & Heritage. He has taught at several institutions including Yale School of Art, Vassar College, Columbia University, UPenn, and SUNY Purchase. He is currently Assistant Professor of Expanded Print at Mason Gross School of the Arts at Rutgers University